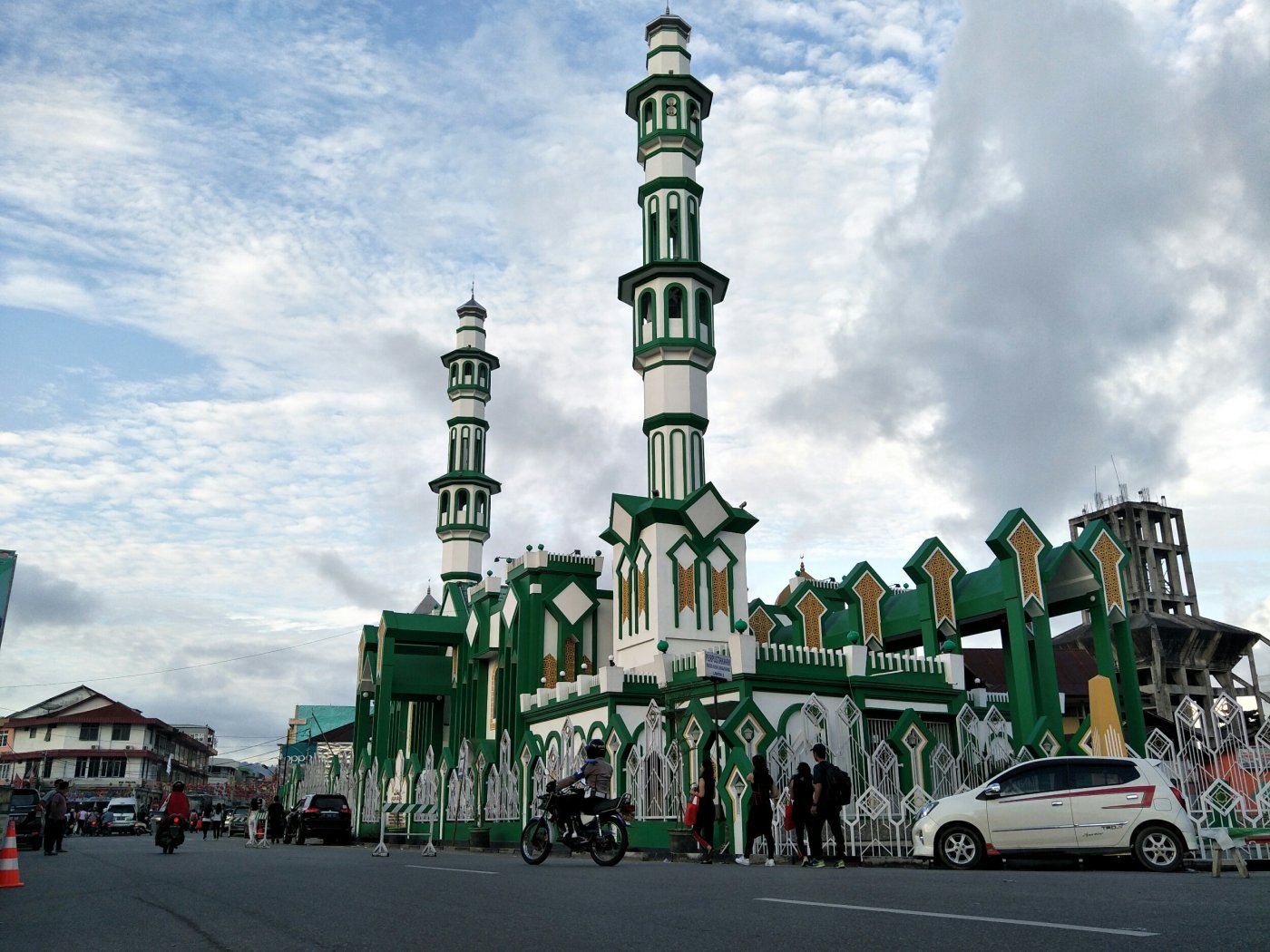 Masjid Raya is one of the stand out landmarks of Singkawang, West Kalimantan

Singkawang is a city located in the province of West Kalimantan and is about 145 kilometres north of Pontianak.

Due to the number of temples in Singkawang, the biggest festival celebrated there is the Chap Goh Mei, the fifteenth day of the first lunar calendar month.

I have been told numerous times by my friends in Indonesia, it is during Chap Goh Mei that I should visit Singkawang.

Having departed rather late from our original time we finally headed off to Tebedu at around 9.00 am in the morning from Kuching Central and arrived at about 11.00 am at Pangkalan Amo. 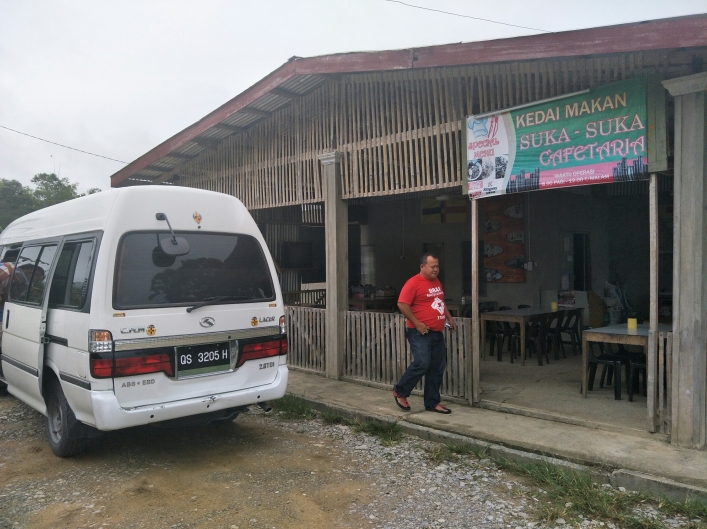 After our early lunch, we then proceeded to the Tebedu Customs and Immigration check point. We cleared Malaysian Border and on the Indonesian side we were required to scan our luggage before clearing our passports.

Our van had to do have a permit to enter Indonesia. We had to pay the permit fees and to also was asked to peel off the van’s window tints before we were given the good to go signal from the Indonesian officials.

We changed money with some mobile money changers and also bought some local sim card for us to stay connected. By the time we settled the paperwork and all it was already 2.00 pm and we were definitely behind time.

We drove on from Entikong for about one an a half hour when our driver decided to take a short break at Sosok. Poor fellow didn’t managed to have his lunch earlier as he was doing the paper clearance.

Once we finished our coffee, we then continued our journey towards the next town, Landak.  It was a strange feeling as the moment we drove from Entikong, there were house all along the way, it never felt like we actually left Entikong.

Another hour driving we then reached Landak, where we again made another quick stop to meet up with a friend. Since it was already 5.00 pm this meet up was a quick one.

Twenty minutes, enough for one toilet break, then we were off again.  We had another two hundred kilometres to cover and according to google maps, another four hours drive.

So we drove on some more, drove into the sunset and into the night. By 8.00 pm we were already hungry and figured we should take our dinner and not risk finding dinner in Singkawang fearing the shops might be closed.

We reached the next small town, Mempawah and had our dinner at this nice small eatery. 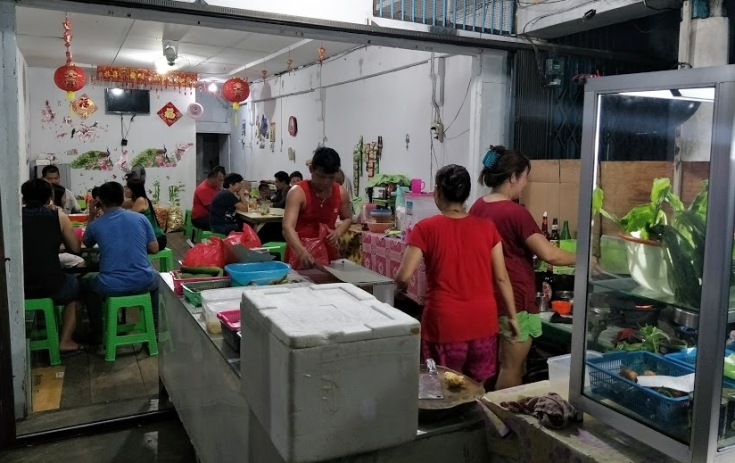 So we had fish, steamed rice, veggie and soup for dinner. I also managed to try some fritters from a roadside vendor. Molen is what they called these fritters.

Once dinner was done, we continued with our journey to Singkawang.  We had about another 75 kilometres to go and estimated that we would reach Singkawang at about 10.30 pm.  This time most of us was already so tired and I managed like forty minutes of sleep.

We reached Singkawang at 10.30pm picked up the keys of the rented house and for me, it has been a very long day.  By the time I showered and got into bed, it was already midnight. We had been 14 hours on the road from Kuching.

After we showered and got ready that morning we headed to Singkawang to see the Chap Goh Mei procession.

Spectators gathering near the temple, the starting point of the procession.

The highlight each year during Chap Goh Mei, is the procession of “tatung” or shamans around the city. This year they had 1068 of these ‘tatung’.

One shaman with all sorts of piercings.

For a first timer like me and also for some of us, it can be mind-boggling to watch. all the piercing, sitting on blades and sharp nails, not a scratch.

A dayak with full regalia joining in the procession.

One unique feature is the participation of the dayak community of Singkawang in this Chap Goh Mei. The festival is embraced by every one here. 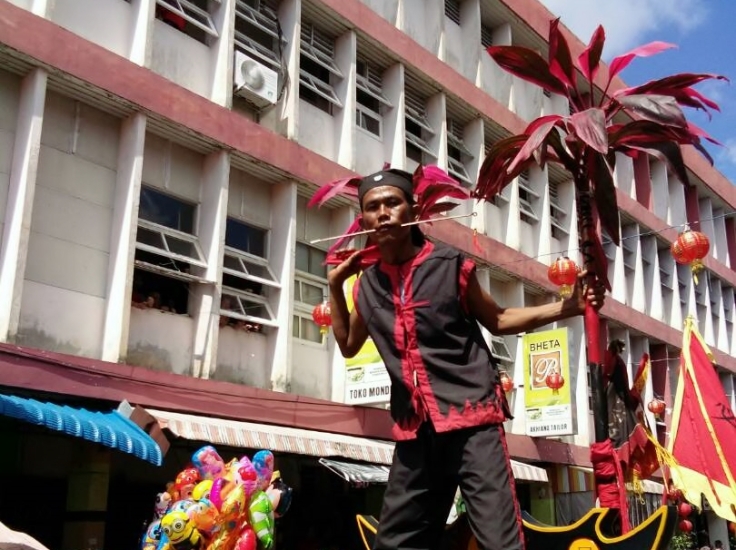 More dayaks in the procession.

By lunch hour the procession had finished and I managed to catch up with a few Indonesian friends in Singkawang and they offered me a tour of the other attractions around Singkawang. 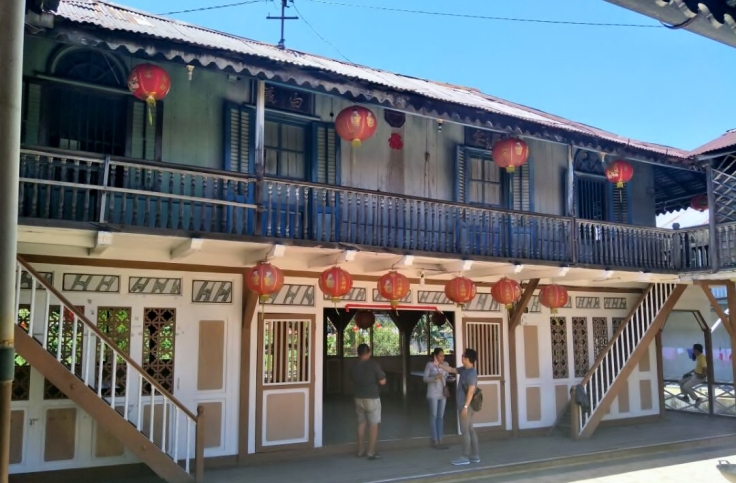 One of the first chinese settlers in Singkawang. The Tjhia Family residence. Over 100 years old. 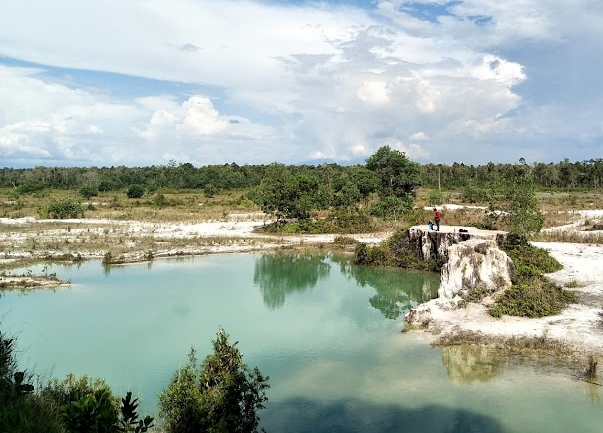 Singkawang used to be a thriving gold mining town and now the once busy mining grounds are dotted with small pots of reservoirs. 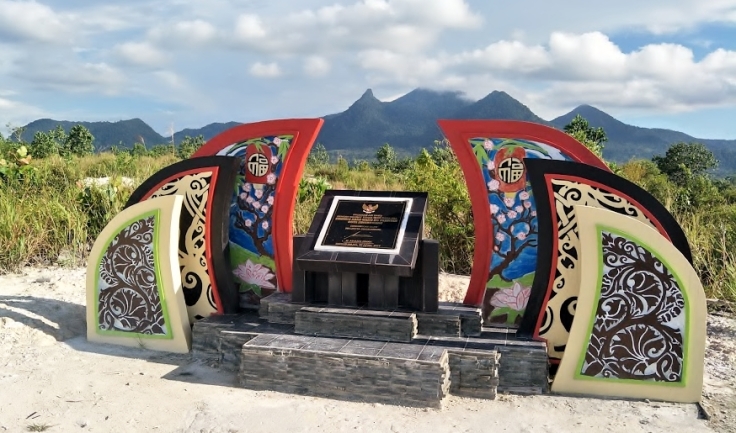 View of Embung (reservoir) Pajintan. Tends to be a popular hand out place for locals during the afternoons. Been told you get nice sunsets here.

Since we departed late from Singkawang, by the time we reached Sambas, it was already noon time. We drove around and apparently ended up at the door steps of the Palace of the Sultanate of Sambas. 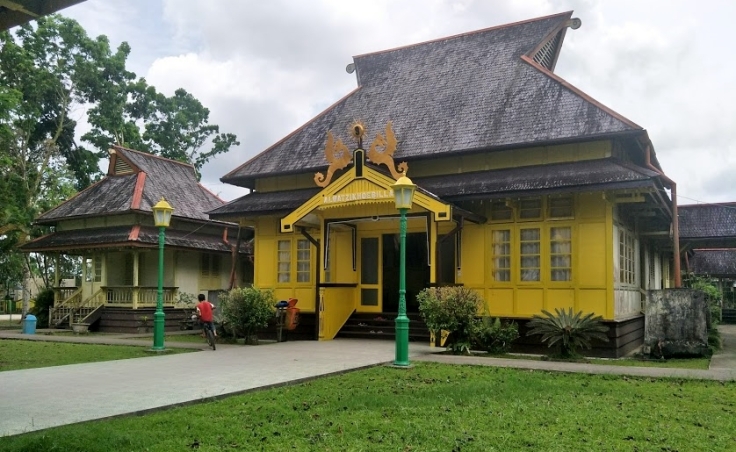 Palace of the Sultanate of Sambas, named Alwatzikhoebillah

The palace does not charge any entrance fees to the visitors. The palace is constructed entirely from ironwood with golden-yellow as its dominant architectural colour.

Mosque built in 1885 near the palace.

Done with the photography and talking to some of the elders there, we headed back into town for our lunch. We all agreed that we should go try some seafood. One last taste of Indonesian cooking before heading back to Malaysia. The food that we have eaten here has been fantastic and very reasonable.

Once we were done with lunch we then proceeded our journey to Aruk border point. This took us about 2 hours. We reached Aruk at about 4.00 pm and after passport clearance we were back in Sarawak.

How much was this trip?

Please take note that if you intend to drive, make sure you have a photo copy of the vehicle green card, copy of your insurance, drivers license and passport.

Accommodation –  Plenty of choices if you look up the internet for accommodation options in Singkawang.

Thank you for reading. Do leave your comments below or if you have any inquiries, I shall get back to you soonest.